Australia’s most significant (and successful) early nature writers was Edmund James Banfield (1852-1923). Born in England, Banfield followed in his father’s footsteps and became a journalist, initially in Melbourne and Sydney but then in Townsville, where he became sub-editor of the Townsville Daily Bulletin. Banfield soon got involved in local politics, too, advocating for the separation of north Queensland as a separate state, arguing that there were two Queenslands: the south, almost entirely within the temperate zone and the north, within the tropics and that the voice of the tropic half was “drowned in the torrent of the temperate” (Confessions, 77).

In 1897, Banfield was given three to six months to live. He retreated to Dunk Island, where he recovered and lived for another 23 years. He and his wife, Bertha established a home and planted fruit trees and vegetables. Goats and jersey cattle provided milk, butter and meat. Tom, one of the four remaining descendants of the island’s four hundred original inhabitants  – wiped out in clashes with whites – welcomed the Banfields and taught them how to live from produce of island.

Banfield’s accounts of island life, in The Confessions of a Beachcomber (1908), My Tropic Isle (1911), Tropic Days (1918) and Last Leaves from Dunk Island (1925)  received popular and critical acclaim in Australia and overseas when they were initially published, prompting comparisons to H.D. Thoreau and Robert Louis Stevenson. Banfield’s exotic location and seemingly idyllic lifestyle – “the absolute freedom of sites uninhabited, shores untrodden” (Confessions: 53) – contributed to his popularity, readers accompanying Banfield on his exploration of: 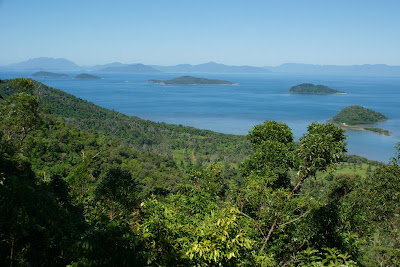 the states and moods of all the bays and coves of all the isles; the location and form of rocks and reefs; the character of shrubs and trees; the nature of the jungle-covered hilltops; the features of bluffs and precipices; to understand style and manner and conversation of unfamiliar birds; to discover where the turtle most do congregate; the favourite haunts of fishes (Confessions: 53).

Tropical Queensland’s landscape is not that of the stereotypical Australian bush, and has not been as prominent in the national imagination or the canon of Australian literature. While tropical Queensland has tended to be represented, in literature, as either heaven or hell, Banfield showed it was possible to live self-sufficiently, and in harmony with nature. His works chart his growing love for the island, where he is increasingly at home. As the Times Literary Supplement noted in a review of Tropic Days, Banfield “gives the impression of having absorbed its sunshine and seawater until he has become part of it”.

Banfield’s nature writing is based on real lived-in experience of place. As well as Thoreau, critics have compared Banfiedl to John Burroughs and William Henry Hudson, partly for his capacity for close observation and description, like the following garden-like images of the reef: “On the rocks rest stalkless mushrooms, gills uppermost, which blossom as pompom chrysanthemums; rough nodules, boat- and canoe-shaped dishes of coral” (Confessions: 130).

Sydney’s The Daily Telegraph commented that Banfield as fond of solitude as Thoreau pretended to be, though Banfield was far from alone in his island, accompanied of course by his wife, several Aboriginal servants, and as he became increasingly famous, streams of visitors. Banfield was also rather more self-sufficient than Thoreau, and his life in nature more long-lasting. It is a little ironic that Banfield was such a detailed observer of nature. He had only one eye, the other damaged in a bike accident as a young man and eventually removed after it became infected. His wife, Bertha, was deaf in one ear, and had some sort of trumpet-like hearing aid, which must have made for some comical scenes on the island as they aged.

Banfield was also an early advocate of wildlife protection. The third chapter of Confessions is titled ‘Birds and their Rights’ – at a time when the rights of animals was not at all in our consciousness. He secured protection for birds on the island, preventing any shooting or collecting. The sanctuary was made official by the Queensland government and Banfield an honorary warden.

Banfield died on Dunk Island of peritonitis in 1923. Bertha had to wait, alone, for three days before she was able to flag down a passing steamer. He was buried on the island and a cairn was later built over his and Bertha’s graves. Dunk Island, of course, has since become a resort, which would not have pleased the Banfields, though most of its infrastructure was destroyed during cyclone Yasi in 2010. A campsite and 10km walking track are due to reopen by the end of this month.

Although largely forgotten today, Banfield is one of Australia’s most significant nature writers. He put far north Queensland on the map and introduced Australia’s tropical landscapes, flora and fauna to an international consciousness, particularly the Great Barrier Reef. As the Sydney Mail review of Last Leaves enthused:  “… no better, more humane, more finely descriptive, or more enticing books have been written by an Australian of Australia, or, indeed, by any writer of any portion of the earth’s surface.”