I’ve kept this picture of two Lewis chessmen on the wall by my writing desk for more than ten years. There’s something about the beserker, crazy-eyed and biting his shield.

Seventy-eight chessmen were found on the Isle of Lewis, in the outer Hebrides, in 1831. They date back to the twelfth century, and are thought to have come by sea from Trondheim, Norway. Perhaps that’s the appeal; I’m of Scots descent, with suspected Viking influences, and a medieval obsession.

Today, the chessmen and women (eight queens) are held between the British Museum and the National Museum of Scotland. This has been controversial, with Scotland believing the pieces should come ‘home’ – even more relevant given this year’s Scottish independence referendum.

I long to hold one piece, to smooth the walrus ivory, the carved detail, all that history. And … slip it into my pocket.

The picture inspired a gift from my former partner: a replica Lewis chess set. She was upset that the beserker’s teeth are not as prominent as the originals, but I handle them – the rooks – most days.

This month, my mother returns from a tour of the Scottish Isles, including the Isle of Lewis. I’m hoping a chessman makes one more journey. 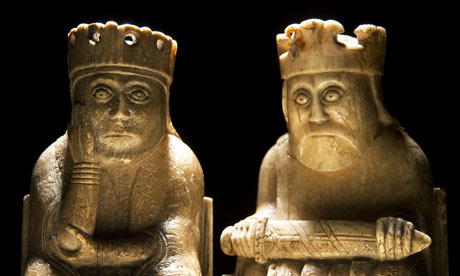