When we first set up Olvar Wood, we kept hearing a deep mournful call carrying from far off in the early evenings, like a child speaking into a piece of poly pipe down near the large dams on the citrus grove below the retreat: Woo-hoo.

It carried over a long distance and at first I thought it children playing: calling to each other through a poly pipe, underwater perhaps. And then guests started hearing it, too. As one writer put it: “It sounds like someone impersonating an owl.” After a time, and hearing it through the evening and early morning, in slightly different locations, on all days of the week, we began to believe it really was an owl.

Consultation with our bird books and listening to recorded owl calls on line convinced me the call belongs to a pair of Powerful Owls calling to each other. They have moved closer to our cottage over time, and now, in summer particularly, you can hear them calling from late afternoon till early morning. Or perhaps sound just carries further and we are awake longer in summer, as the bird books suggest they call more often during the mating season/winter.

The powerful owl, or Ninox strenua, is Australia’s biggest owl: about 65cm. It looks a bit like a Boobook, with a similar barred pattern, only bigger, and with a proportionally smaller head. It is also called a Powerful Boobook. They have striking yellow eyes, and intimidating pale yellow feet. All this from pictures, because I have never been lucky enough to see one. I did find a round-ended barred feather once, in the orchard, which I think could be one of the shorter back feathers of a Powerful Owl.

The shy Powerful Owl prefers open forests and woodlands, or sheltered gullies in wet forests with dense understoreys, especially along watercourses. They need deep hollows in old growth trees to nest, and roost by day in tall forest trees with a commanding view of their surroundings. Each pair has several roosting trees and they roost on different trees on different days, not always together, but always within calling distance.

Powerful Owls hunt only within tree cover. And only at night. Snatching their pray from foliage and branches in banking swoops through the forest. Their victims are mainly small to medium tree-living mammals – gliders and possums – although they also eat mice and rabbits and … are strong enough to carry off koalas! This idea upsets me, given dwindling koala numbers, and I can’t help worrying about the well-being of some of the young koalas we haven’t seen for a while. Powerful Owls apparently also eat other, smaller owls, like the Tawny Frogmouth, which sounds a akin to cannibalism… They rip their prey apart, eating it piece by piece, usually starting with the head. Sometimes they carry the hindquarters back to their roost, place it on a branch and hold it all day in their talons: tenderising owl style?

The powerful owl mates for life (over thirty years in some cases, which is somewhat longer than most human marriages last) and together pairs defend a defined territory of up to 1450 hectares. During the breeding season, the male prepares the nest, and roosts in a “grove” of twenty or thirty trees close by the nest tree, providing the female and young with a constant supply of food during the early part of the nesting period. The female incubates the eggs  – usually only one or two each season – and broods the young, who emerge later in the nesting period to hunt for food as well. Young owls remain with the parents for several months after fledging and may stay within their parents’ territory for over a year.

Powerful Owls sound like very particular birds and are a threatened species now, due to clearing of woodland like this; it is an honour indeed to live in their territory. 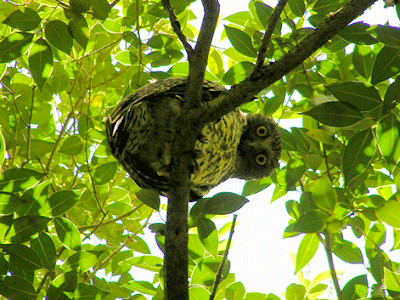