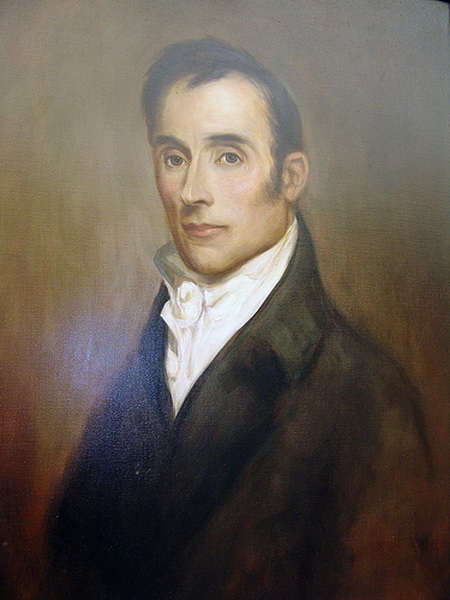 The second of the three great naturalists who influenced the development of American nature writing was Alexander Wilson. In 1794, aged twenty-eight, Wilson emigrated from Scotland, where he had been a none-too-successful weaver, reformer, painter and peddler and poet.

Wilson scored a teaching job and became friends with  William Bartram, who encouraged his drawing and study of natural history. Inspired by the beauty and diversity of American birds, Wilson devoted his life to their study, travelling all over America on foot in search of new species. By the time of his death, in 1813, he was America’s authority on birds and had almost completed the nine volumes of his American Ornithology, illustrating 268 species, 26 of which had not previously been described.

It was not just Wilson’s illustrations, but his writing that had an impact, bringing a poetic sensibility to natural history. His eloquent and detailed prose describing the appearance and habits of birds had a broad appeal. His attribution of human characteristics to his subjects, although open to criticism today for its anthropomorphism, had the effect of putting birds on a more equal footing with humans. Wilson’s style is a charming one. On the Mottled Owl, for example, he writes: 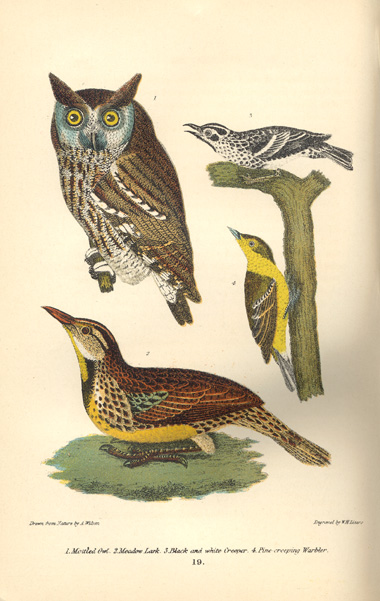 Hollow trees, either in the woods or orchard, or close evergreen in retired situations, are the usual resting places of this and most of our other species. These retreats, however, are frequently discovered by the Nuthatch, Titmouse, or Blue Jay, who instantly raise the alarm; a promiscuous group of feathered neighbours soon collect round the spot, like crowds in the street of a large city, when a thief or murderer is detected; and, by their insults and vociferation, oblige the recluse to seek for another lodging elsewhere.

An early conservationist, Wilson undertook pioneering studies of wildlife populations and predicted the impacts of human settlement on native habitats. In 1807, when merchants were killing thousands of robins to to grace the plates of genteel diners in Philadephia’s restaurants, Wilson published an article warning that consumption of robin flesh was  a health risk due to their diet of pokeberries. The claim was untrue, and he knew it, but the public trusted his authority – and the strategy was effective in reducing the number of robins killed.

I recently had the pleasure of examining an 1832 edition of American Ornithology, at the University of Queensland’s Fryer Library.

I handed over the catalogue details and set myself up at an empty table. Several minutes later, one of the numerous bobbed librarians came down bearing the three volumes. I had only requested the first, which she showed to the desk attendant, indicating it was damaged, its spine coming away. They entrusted it to me nonetheless. Tucked inside the front cover was a loose sheath of coloured plates. I had a close look at these first and set them to one side, thinking to leaf through and find where they belonged. There were no plates missing in the Wilson volume, and now I saw that the loose plates were quite different in style, and from a smaller book. The text, too, much less pleasing and poetic.

I padded over to the counter in bare feet. “This is not from the Wilson,” I said. “It must be from another book.”

“Oooh,” she said, examining the pages. A research mystery.

I had already checked the pages for a clue as to title or author. “These are English birds,” I said. “Wilson wrote about American birds.”

“Ah.” She tapped at the computer some more. She explained that most of their bird books were from the large collection of a particular donor. And that he hadn’t been adverse to tucking things inside books. “If we have it, we’ll find it.”

There were three ladies gathered around now, handling the pages and offering suggestions, and I told them the story about Wilson and the robins and his connection to my research, then left them to their detective work.

I was still reading and taking notes when they called me back over. “It’s from a volume by Bloom,” she said. “When you said he was English, that gave us a good clue.” The bobbed woman appeared again, with the very book, and we all watched as she slotted in the missing pages. There was a collective, satisfied sigh.

After I had returned American Ornithology and moved on to another text, a more senior librarian came down, had a quick look at the volumes, listened to a whispered explanation, and signed the form inside the front cover.

When I was packing up, the woman on the counter placed her hand on Wilson, still sitting on the counter. “We’re sending them out for repair, she said. “Five thousand dollars, they’re worth. The other one, not so much: five hundred.” 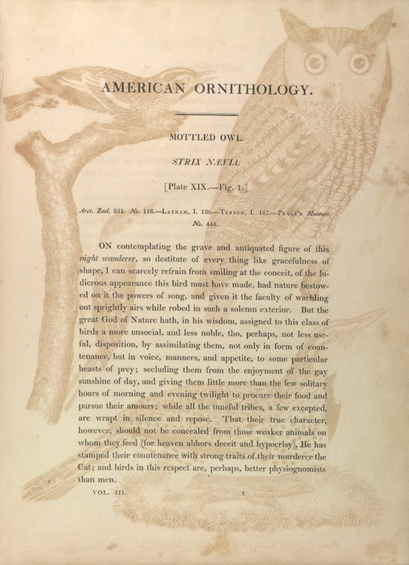 Wilson believed that he was not only contributing to science but the cultural development of a nation. And the work of preserving America’s natural treasures to be the work of God. I wonder though, whether he could have imagined the long-term value and impact of his devotion to birds. Sir William Jardine notes, in his introduction to the 1832 edition of American Ornithology, Wilson’s poetry was well regarded but it was his ornithological work that would make him famous: “Wilson was an observing naturalist, and, perhaps, nature never had a more ardent pursuer.”