Mr Wigg in the World 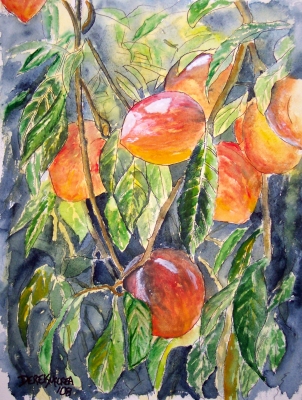 I’m thrilled to announce that my novel, Mr Wigg, will be published by Hachette in July this year.

The publication has come about as a result of the 2011 QWC/Hachette Manuscript Development Program, of which I was a finalist. It’s a great program, and I’m thankful not only to Hachette and the team at the Queensland Writers Centre, but to the other talented authors who made our retreat so productive and pleasurable – and have been wonderful support and company since.

What’s Mr Wigg about? Well, it’s about Wigg and his orchard – the final year of one man’s life.

There were stories that the Peach King was a magic tree, older than time. Others said he had once been a great man, ruling over fertile lands and gentle people with a beautiful queen. Whatever the whispers, he was one of them now; his fruit – though a little larger and sweeter – formed just as theirs did.

It’s the summer of 1971, not far from the stone fruit capital of New South Wales, where Mr Wigg lives alone on what is left of his family farm. Mrs Wigg has been gone a few years now but he thinks of her every day. His daughter, too.

Mr Wigg spends his days tending his magnificent orchard, harvesting the fruits of his labours and, when it’s on, listening to the cricket. Things are changing though, with Australia and England playing a one-day match, and his new neighbours, the Traubners, planting grapes for wine.

His son is on at him to move into town – it’s true a few little things are starting to go wrong every now and then – but Mr Wigg has his fruit trees, chooks, and garden to care for. His grandchildren visit often: to cook, eat, and hear his old stories. And there’s a special project he has to finish.

Mr Wigg’s hammer sounded on the anvil like the village bell, each stroke sending off a spray of burning sparks. He beat on, shaping the branches of the tree that had come to him in his dreams.

This entry was posted in Mr Wigg, News. Bookmark the permalink.