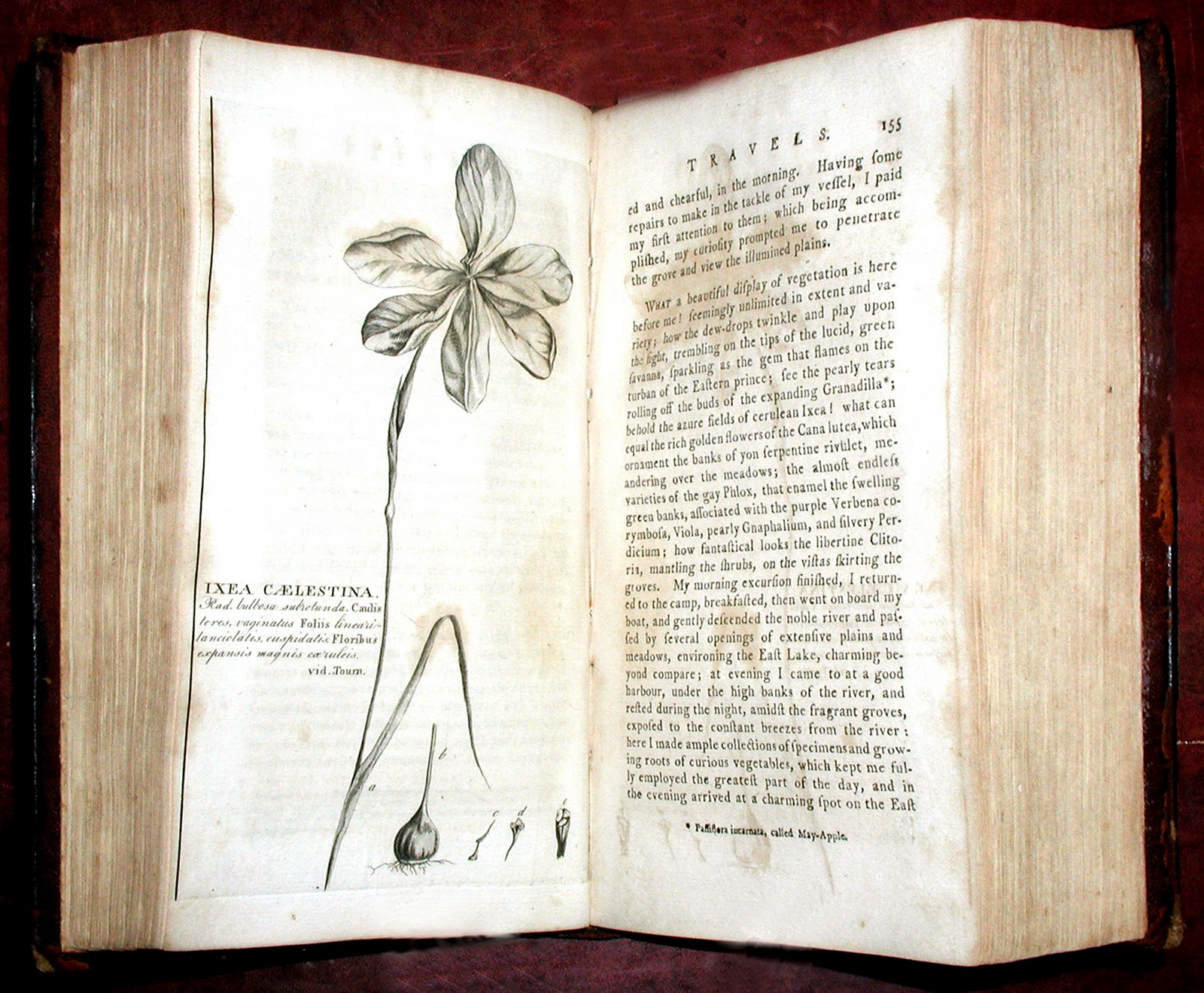 Three early American natural history writers had a particular influence on the development of nature writing: William Bartram, Alexander Wilson and John James Audubon. As Romanticism shifted the emphasis from the physical qualities of the landscape to the feelings it engendered in the observer, and America looked to its natural landscape as a source of national identity, naturalists Bartram, Wilson and Audubon documented the flora and fauna of a new world. Their blending of natural history and the personal essay brought poetry and imagination to science.

William Bartram (1739 – 1823) was the son of renowned botanist, John Bartram, whom Linnaeus had pronounced the world’s greatest natural botanist. As a boy, William accompanied his father on many of his travels from their home in Philadelphia to the Catskill Mountains, the New Jersey Pine Barrens, New England, and Florida. From his mid-teens, William Bartram was noted for the quality of his botanic and ornithological drawings.

In 1773, he embarked upon a four-year journey of his own, through eight southern colonies. Bartram made many drawings and took notes on the native flora and fauna as well as his experiences with native American Indians. He discovered and described numerous new species on his adventures, returning home with an encyclopedic catalogue. His journals were first published in 1791 as Travels through North and South Carolina, Georgia, East and West Florida, and were regarded at the time as a scientific and literary classic. His narrative style – a reflective and passionate account of an individual’s immersion in wilderness – helped establish the genre of the nature essay. Travels influenced not just the great scientific minds of Europe but the writing of Coleridge, Wordsworth, Shelly, Carlyle and Blake. Coleridge write to Emerson suggesting that “all American libraries ought to provide themselves with a copy of that kind of book; and keep them as a future biblical article.”

Travels does carry a somewhat biblical tone. Michael Branch suggests that “it was Bartram’s devout faith in the divinity of nature that distinguished his work from most scientific tracts and consequently helped open the way for American literature to explore the spiritual resources of the wilderness.” Bartram’s particular spirituality, seeing nature as the work of God, perhaps also influenced the development of transcendentalism, which was to have its own role to play in the development of the nature essay.

The deep south of Bartram’s Travels is lush and tropical, reminding me of my own part of the world at times, with its sword like palms, and ferns, and green wet. I was amused to read of his first encounter with lantana: “the whole plant is of a most agreeable scent” (105). Here, of course, it is a prickly interloper creeping into Olvar Wood from all sides, and I’m afraid I cannot find anything agreeable about it at all.

One of my favourite sections from Travels describes the “resurrection from the deep” (87) of an insect from the genus Ephemera – the water residing mayfly family – whose graceful adult lives, after almost a year spent as an immature naiad, last only a few hours:

Their whole existence in this world is but one complete year: and at least 365 days of that time they are in the form of an ugly grub, buried in mud, eighteen inches underwater, and in this condition scarcely locomotive as each larvae or grub has but its own narrow solitary cell from which it never moves, but in a perpendicular progression of a few inches, up and down… what a lesson doth it not afford us of the vanity of our own pursuits! (89) Bartram never complains of the discomforts of leeches, mosquitoes or even alligator attacks, ever retaining a sense of wonder in his Eden. Ecocritics have noted Bartram’s relative open mindedness towards native Americans and the respect afforded flora and fauna, both of which were somewhat revolutionary in an age of conquest. He understood the interconnectedness of plants and animals and was conscious of the impacts of his presence on the natural balance of  the local environment. These anti-anthropocentric traits were precursors to contemporary ecological thinking.

Bartram’s Travels marked an intersection of natural history and literature, of science and imagination, that would give rise to an American nature writing tradition.